A common misconception preventing many people from switching to solar is that it costs an excessive amount of money. Here’s the truth—the cost of solar is decreasing so rapidly it’s now cheaper than coal. This was revealed by Lazard’s latest annual Levelized Cost of Energy Analysis. This dramatic change is a powerful sign illustrating the start of an energy revolution.

According to their latest report, energy from utility-scale solar plants has seen the biggest price drop.

Data shows a staggering 86% decrease since 2009. Based on their chart, the average cost of producing one megawatt-hour of electricity through solar in 2017 is $50. Whereas producing the same energy capacity from coal costs $102, which is more than double the amount for solar. 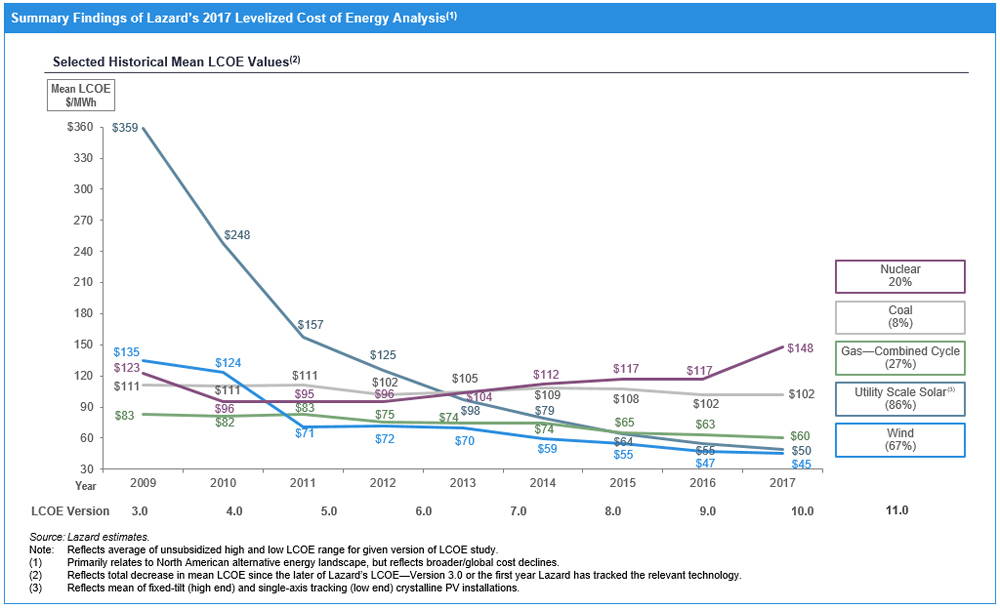 Lazard’s analysis is based on the LCOE calculation or “levelized cost of energy” which measures the cost of generating energy for a particular system. It also includes the total production cost of building and operating a power-generating plant.

Decades ago, solar photovoltaic panels were still experimental technology, requiring high costs. Today, the construction of a utility-scale solar plant is far cheaper than building a fossil fuel-burning power plant of equivalent capacity. Thanks to new manufacturing techniques, solar companies were able to come up with better technology and panel design that require fewer resources overall. The innovations in the manufacturing process led to more affordable panels for the average consumer.

The rise of renewables is apparent in the coming years, especially since they’ve proven its capacity to yield profits. UN Environment’s 2019 Global Trends Report in Renewable Energy reveals that solar dominated the 2017 global investment in new power. That same year, the solar industry attracted $160.8 billion in investment. What these numbers tell you is that the solar sector is a force to be reckoned with.

To date, there are more than 1.3 million solar installations in the U.S. Given the rising costs of conventional energy sources, alternative sources are becoming even more attractive. At Sun Path Electric, we offer a FREE Sun Analysis to determine whether your home is a good match for solar. Switching to solar is an investment you can be proud of for years to come, and we would love to help you on that journey.