Part of the challenge of switching to solar is understanding unfamiliar industry jargon. Solar doesn’t have to be confusing or complicated. We’ve simplified some of the need-to-knows with this A-Z solar glossary. Learn the key terms and acronyms like ITC, DC, REAP and a bunch of other words to help you gain better insight on solar power!

Accelerated Depreciation – a financial incentive in the form of government tax deduction only applicable to business entities that have invested in solar. It is a method of depreciation wherein the value of a solar system reduces at a faster rate and is applied during the first five years of installation. 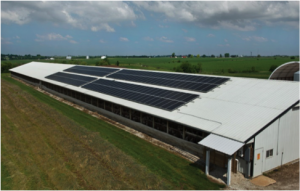 Alternating Current (AC) – has a constant voltage but constantly changes position between positive and negative polarities. AC powers most household appliances as it is better transmitted over long distances and is safer to change its voltage level.

Ampere (amp) – base unit of electric current, measuring flow of electrons over time.

Array (Solar Array) – all the solar panels combined in a group. Solar arrays can be installed on the roof, or on the ground, and can be arranged to form different patterns to capture maximum amount of sunlight.

Azimuth – in solar terms, it is the angle your solar panels face from a bird’s eye view. It plays an important factor to determine the amount of solar energy collected. A solar panel facing south, with an azimuth of 180° has the highest energy yield.

Backsheet – it is the last layer found at the bottom of a solar PV panel. It protects the solar cell from moisture, UV light and severe environmental conditions. Often made of a polymer or a combination of polymers.

BIPV (Building-Integrated Photovoltaic) – refers to a group of PV modules installed into the building envelope, such as the roof or the side wall.

Cell (Solar Cell) – a section of a PV module that converts photons from the sun into electricity. Individual solar cells are combined to form a solar panel.

CIGS (Copper Indium Gallium Diselenide) – newer thin-film solar panels in the market that promises better efficiency than other thin film panels. Manufactured by depositing a thin layer of copper, indium, gallium and selenide on the glass.

Crystalline Silicon (C-Si) – general term used for most solar panel types, which are made of silicon. See polycrystalline and monocrystalline for more details. 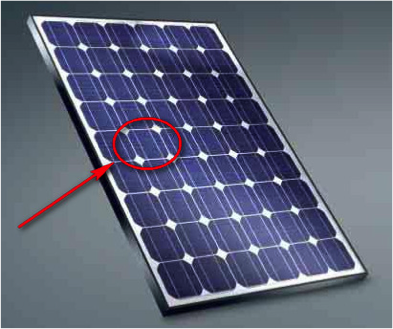 Current – the flow of electrons. Light energy in photons that hits your panels is converted into electric current which then gets turned into electricity to power your home or business.

Cycle – one complete discharge and recharge of a battery. One cycle means the solar battery has been “filled” up to its maximum capacity, used, and then gets recharged by the sun.

Direct Current (DC) – electricity that flows in the same direction, continuously. Solar panels produce DC electricity which is then converted into AC before home use.

DNI (Direct Normal Irradiance) – the amount of sunlight that ‘hits’ a surface from the direction of the sun at its current position in the sky. DNI helps solar installers predict how much energy is produced from your solar panels.

Distributed Power Electronics – a category the solar industry uses to include all microinverters and power optimizers.

Electrical Grid – an electrical power system network consisting of the generating plant, transmission lines, substation, transformers, distribution lines and the consumer. Solar panels can be connected to the grid to serve as a back-up or completely separate from it (off-grid)

Ground-based Solar Array – similar to roof-mounted solar arrays but are installed at ground level. The system is anchored to racks near the structure for which it provides power. Usually found in larger commercial installations. 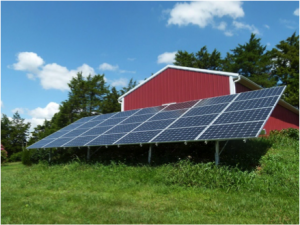 Inverter – an essential component in any solar installation that converts the DC current output of a PV panel into the required voltage (AC current) for your home or business.

Kilowatt-hours (kWh) – a measure of how much energy you’re using often seen on your monthly power bill. For instance, a 100-watt item could stay on for 10 hours before it could rack up 1 kWh.

Microinverter – a plug-and-play device that functions like an inverter but for each solar panel rather than the whole system. Their main purpose is to reduce energy losses often caused by shade and soiling. The output from each microinverter is combined before transmitted to the grid.

Mismatch – occurs when some solar cells are damaged or shaded. As a result, a section of the module produces a different amount of energy than other parts, reducing efficiency for the whole panel. Can be prevented by using microinverters and power optimizers.

Monocrystalline Silicon – a type of solar panel commonly used today. Monocrystalline panels are made of single-crystal silicon, often of high purity making it the more expensive choice in the market. Known for their high efficiency rate and high lifetime value.

Net Metering – a utility billing mechanism that allows individuals to sell their excess solar energy to power companies by sending it to the local grid. In exchange, a solar user can pull it from the grid when their system is under-producing. Currently, 43 states plus the District of Columbia have allowed net metering.

On-Grid – another term for a grid-connected photovoltaic power system. To be on-grid means you can still rely on your utility company to supply you electricity during non-solar hours. Excess solar power can be sent back to the grid.

Off-Grid – solar systems that are totally disconnected from the local power grid. Excess solar power is stored in batteries for use during nighttime. Require a lot more specialized equipment to function.

Peak Shaving – a technique used to reducing energy consumption during “peak” hours, usually from noon to 6pm, when power companies charge the highest. This can save you substantial amounts of money.

Photo Voltaic (PV) – a scientific term for a solar panel that describes how it functions. ‘Photo’ refers to photons or packets of light and ‘Voltaic’ refers to voltage and electricity. Thus, when you save PV panel, it refers to a panel that turns sunlight into energy.

Polycrystalline Silicon – similar to ‘monocrystalline silicon,’ but made of raw melted silicon. They are cheaper but less efficient. They are quite sensitive to high temperatures leading to a lower lifespan.

Power Optimizer – a DC/DC converter connected to each solar module to increase efficiency and energy output. It monitors the performance of each module and communicates performance data to a monitoring platform.

Racking – used to secure solar panels to a roof. The racks are bolted to the roof, and the panels are fixed onto the racks. There are different solar-racking systems available depending on the type of roof and other factors. 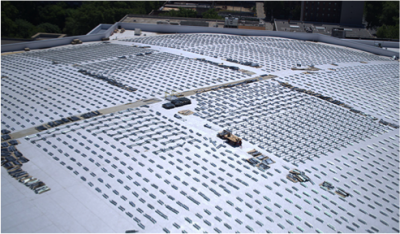 REAP Grant – Rural Energy for America Grant. Offered to farms and other rural businesses for purchase of solar and other renewable energy systems. These grants can cover up to 25% of solar installation costs for qualified applicants.

REAP Loan – Like grants, REAP loans are available to farms and agricultural businesses. It is meant to cover a percentage of your solar investment costs except you have to pay it back. It aims to make the initial installation far more affordable.

Shading – reduces the output and efficiency of a solar panel. Shading may be caused by a tree or another building. Any shading on your roof should be considered thoroughly before installing a solar array.

Solar battery – used to store excess solar energy. A solar battery is a must for off-grid systems. It makes it possible to use solar energy even at night. The higher the battery capacity, the more energy can be stored 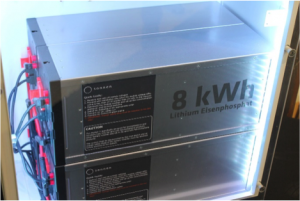 Solar farm – an area of land with a large-scale collection of solar panels are set up. A solar farm usually consists of ground-mounted solar arrays and require lots of acreage. It is often owned by private or regional companies requiring massive power.

Solar panel – a collection of solar cells designed to convert sunlight into electricity.

Soiling – an issue wherein dust and debris accumulate on your solar panels. Soiling can prevent sunlight from hitting sections of the panel, reducing its efficiency.Can be prevented by regular cleaning and maintenance.

System losses – the loss of energy from what was originally collected by your solar panels. System losses can be related to modules, strings, and wiring. Losses related to shading and soiling can be reduced.

Thin-Film – a second generation solar cell that is thinner than the standard crystalline types. The light absorbing layers in a thin film is about 350 times smaller but still maintain strong durability.

Tilt – the angle of a solar panel compared to the ground. An optimum tilt is the key to better energy yield. The angle should be equal to your latitude, adding 15 degrees in winter, or deducting 15 degrees in summer.

Tracker – a device that allows a panel to adjust their position based on the sun’s movement across the sky. It minimizes the angle of incidence between the incoming light and the panel. As a result, the solar system produces much more energy.

Voltage – the pressure required to move charged electrons through a conducting loop. Without voltage, there is no current. Without current, there is no electricity.

Whether you’re a new solar shopper or need a little refresher, please email us if any of these definitions are still unclear. We will find a simpler way to explain them. At Sun Path Electric, we provide free consultations for homeowners who are seeking energy independence through solar. Just fill out the form below, and we’ll guide you through every step.